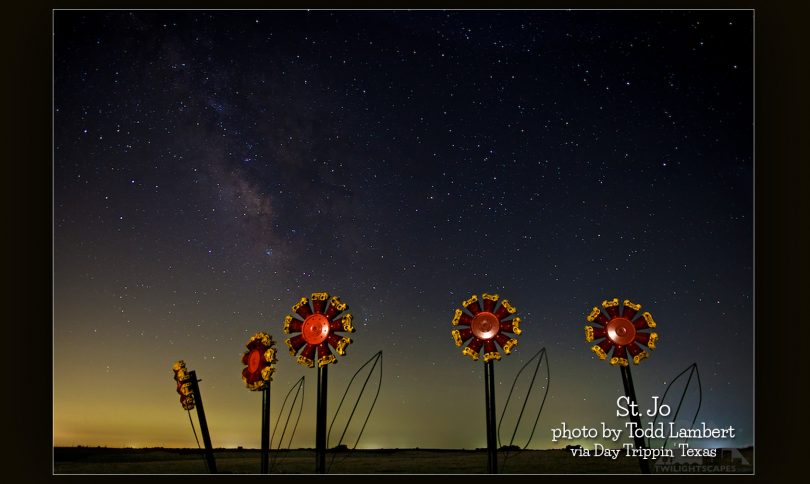 Established in 1856, the city of Saint Jo was originally known as Head of Elm, named for its location at the headwaters of the Elm Fork of the Trinity River.

However, there are two conflicting stories regarding how Head of Elm became Saint Jo, both of which involve Joe Howell, who originally laid out the town.

One theory revolves around a Tennessean named Irby Holt Boggess giving leadership in partnership with Joe Howell, in or around 1872. This was displayed in the Stonewall Saloon Museum on the town square of Saint Jo in 1986 and is incorporated in a story about Mr. Boggess.

The other theory involves Howell’s personal beliefs. Howell was an avid opponent of alcoholic beverage sales, and was thereby given the pejorative nickname of “Saint Jo”, which managed to stick to both Howell and the town he founded (which still, as of June 2009, does not permit alcohol sales).

Saint Jo is an authentic Old West town that brings together history, food, and culture. You can read about Randy Mallory and Sallie Evans’s weekend in Saint Jo here. For a list of shops, eateries, wineries, lodging, museums and more, visit the Saint Jo Chamber of Commerce website. Outside Saint Jo is the Running N Ranch where rancher Earl Nunneley took to creating art as a way  to spend his retirement. But when his installations began to draw a cult like following, he began to think more about his audience. Using telephone poles and junkyard finds as big boy’s tinker toys, he has constructed a menagerie of works that have been hailed by critics in the genre of folk art, but to his neighbors are considered to be just plain crazy. As you step through the gate, you’ll see one of the most prominent pieces in the collection. Fourteen telephone poles jut dramatically out of the ground in a fan-like position. When viewed on the vernal and autumnal equinoxes, they create a single shadow. Pretty clever, eh?

A row of giant sunflowers made from airplane rotary engines blooms nearby.

To visit Running N Ranch, take Hwy 82 from Gainesville towards Saint Jo. Turn south on FM 677 and drive about 1 mile toward the middle of nowhere. It’s at the intersection of 677 and 3207 on the right. You’ll see Earl’s art from the road and you can find parking where Earl moved his fence back for his fans. Just let yourself in the gate, but be sure to close it behind you so you don’t let the cows out.